NEW ORLEANS— Louisiana has taken another important step towards putting students on par with their peers around the world as we increase academic standards and expectations that all our students and schools can achieve at the highest levels. For the first time this year as well, school letter grades provide a more complete picture of student and school performance as they reflect “student growth,” or the amount of progress each student makes over the course of a year.

Overall, the Louisiana Association of Public Charter Schools is pleased with the results this year, as charters mirror the progress of students statewide and letter grades held steady despite with the new, tougher standards.

Under the leadership of Louisiana School Superintendent John White, the state has embarked on the difficult but essential journey to increase standards. The school performance scores released today reflect both the determination and challenges associated with raising the bar.

For the last decade, LAPCS has been a leading voice regarding the need for higher expectations and driving progress inside the classroom. “We are proud that many of our charter school leaders have been the loudest voices for higher standards and creating school performance indicators that reflect more than just how a student performs on the test,” said LAPCS Executive Director Caroline Roemer.

According to the Louisiana Department of Education data, many schools are experiencing growth, including schools with historically disadvantaged students. The following graph shows how the letter grade distribution shifted for charter schools statewide under the new, tougher grading formula: 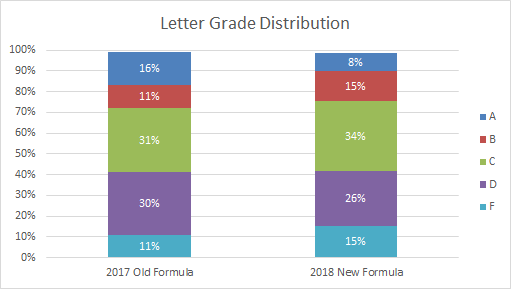 “Like our counterparts at traditional district schools, there are some charter schools that are knocking it out of the park on both achievement and progress, while other charters need to work harder to get their students prepared to meet the new standards. We are no longer sugar-coating academic performance scores, but instead, are pushing towards standards that ensure students are meeting their full potential. Louisiana students and families deserve higher standards and to know how their children are doing measured against these world-class standards,” said Roemer.

As the state of Louisiana continues to raise the bar, the new school performance rating system gives schools the ability to better identify needs and target resources to populations of students who require the most support. “This is one step in the improvement process. While we are candid about our strengths and challenges, we must be steadfast in working towards the new tougher goal of mastery by 2025. We are here for the long haul,” said Roemer.

The new letter grades serve two fundamental purposes: to show parents how schools are doing and to hold schools accountable for how well they prepare all students. LAPCS believes the new grading system acknowledges many of the successful innovations that charter schools are implementing, including the focus on year-to-year student growth and a more robust view of high school education, including how schools prepare students for careers and the workforce as well as college.

(Note: Only 137 of 156 Louisiana public charter schools were eligible to receive letter grades)

The enhanced data performance provides a more accurate snapshot of the state’s progress towards meeting higher expectations in K-12. The Louisiana Association of Public Charter Schools is also proud to applaud schools recognized with significant improvement with Top Gains and Equity Designation with some schools recognized in both designations. 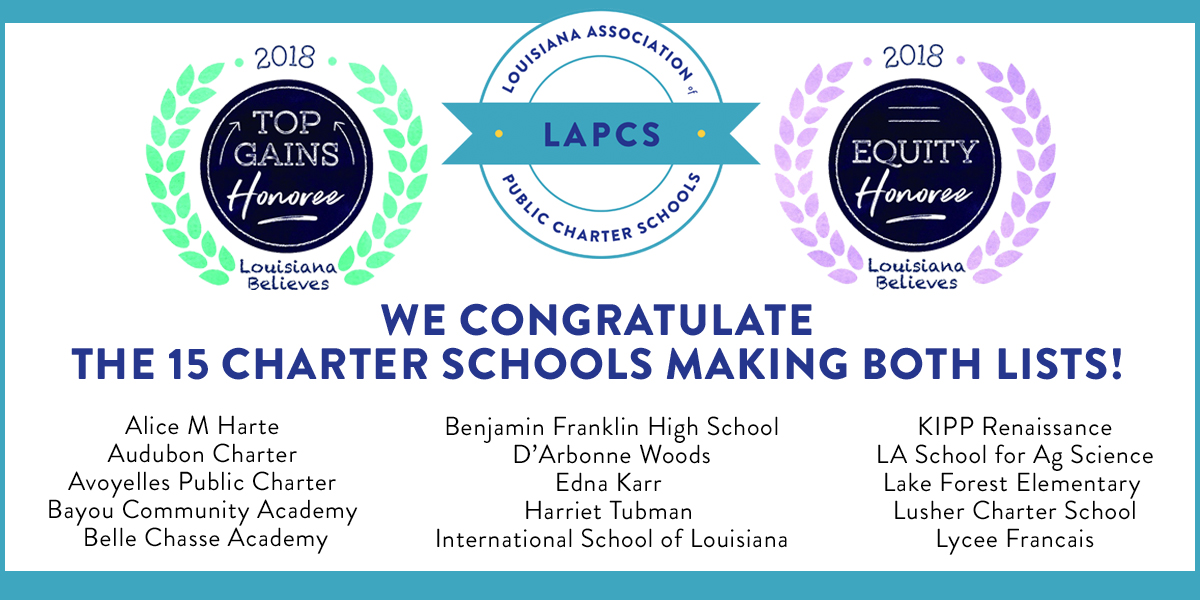 Note: Schools in Bold appear on both lists (15 schools)

While there remain notable challenges in New Orleans, 80% of New Orleans schools earned an “A” or “B” Progress Index rating. New Orleans performance score ranking improved from 59thto 55thamong the state’s 70 districts.

It is important to recognize the historic academic achievement that has been made – moving so many low performing schools to among those who have demonstrated some of the largest growth in the state, such as schools that are part of FirstLine Schools, KIPP Schools, and Crescent City Schools. Additionally, several new charter schools are coming online with solid first-year scores as well, such as Cypress Academy, Rooted School, and Foundation Prep. It is also notable that high school options in New Orleans are improving as a number of high schools improved their letter grade including Abramson Sci Academy, JFK Lake Area New Tech Early College, McMain Secondary and G.W. Carver, all with a “C” or higher grade. Here is the performance data for New Orleans schools.

“There is exciting work going on in New Orleans. Leaders of these schools took over many of the lowest-performing schools. Exemplary leadership and the hard work of educators are moving students ahead. These are the same children previously deemed as impossible to educate. Charter schools are proving those designations are wrong and that we can lift all students,” said Roemer.

LAPCS hopes the new, more rigorous school grading system provides the opportunity for richer discussions between parents, educators, and school authorizers about student progress and equity. LAPCS believes that this will encourage more productive engagement as we have more complete information on student and school performance than we have ever had before.