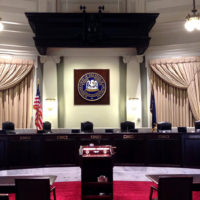 “It is an extremely important moment in the educational landscape in the state; which is why we are asking the Court to side with the students, families and teachers of these charter schools,” said LAPCS Executive Director Caroline Roemer. “This decision is important not just for them, but for all those across Louisiana who believe in parent choice when it comes to public education.”

LAPCS is challenging the 2014 lawsuit brought by the Louisiana Association of Educators and the Iberville Parish School Board because it directly threatens the choice of parents and families to obtain a quality public education by seeking to strip these schools of their state MFP funding. LAPCS is asking the justices to affirm the District Court’s ruling, reverse the Appellate Court’s ruling, and assert once and for all that charter schools are public schools that are entitled by the Louisiana Constitution to receive the same K-12 public school state funding protections as their traditional public school counterparts.

LAPCS believes it will prevail in the funding lawsuit. If the teacher’s union is successful in their case, public MFP funding for any school not under the jurisdiction of a traditional parish or city school board would be jeopardized, forcing many of these Type 2 charter schools to close. As a result, many students could be left without other public school options or possibly be sent back to a local school that has already failed to meet their needs. That scenario would be devastating to the people of Louisiana as many of these state-authorized charter schools provide some of the most unique learning environments in the state such as foreign-language immersion programs, arts-based curriculum, STEM programs, virtual learning, programs catering to children who are dependents of our active military families, and programs that serve as a last-chance school of sorts offering an alternative high school diploma for the state’s most at-risk and over-aged students.

LAPCS filed a brief asking the Supreme Court to consider this case; arguing that the previous unfavorable ruling by the First Circuit Court of Appeals on the issue needs to be reconsidered. The case first came before Judge Wilson Fields of the 19th Judicial District Court in 2014 whereby Judge Fields subsequently ruled in favor of the charter schools, sending their parents and students a clear message: charter schools are public schools and the current funding mechanism established by the state is proper. However, by a narrow margin of 3-2, the First Circuit Court of Appeals reversed the District Court’s decision in January 2017, ruling that because these state-authorized charter schools operate outside the jurisdiction of traditional city and parish school systems, they are therefore not public schools and not entitled to receive the state’s MFP funding for K-12 public schools. Through their dissenting opinion, Judges Holdrige and Whipple took the majority to task for its position and “tortured interpretation of the constitution” that the New Type 2 charter schools are not public schools as “neither the constitution, legislation, nor jurisprudence requires that the words ‘public schools’ means public schools in parish or city school systems.” Such a ruling not only impacts the Type 2 charter schools but the many special public schools that have long existed in Louisiana such at the New Orleans Center for Creative Arts and university lab schools to name a few. The case now moves to the Supreme Court.

In its brief, Black Alliance for Education Options reiterated that MFP funding is critical for the lives of many stating, “This case not only adversely impacts new Type 2 public charter schools, but any public school under the direct supervision of the Board of Elementary and Secondary Education (BESE)…Taking MFP funding from new Type 2 public charter schools will impose a substantial financial burden on these schools that will jeopardize their survivability; and for Black families, this means lesser school options.”

“This case is nothing less than the politics of special interest of a few who oppose school choice because they see it as a threat to their monopolies on public education. Their argument is very straightforward: they are opposed to money following a parent’s choice,” said Roemer. “It’s time they stop fighting school choice through litigation, stop spending precious dollars on lawyers and instead, start working on improving education in the classroom.”