NEW ORLEANS— Following the release of 2019 School Performance Scores, the Louisiana Association of Public Charter Schools is pleased to report that our state’s charter schools continue to mirror or surpass the progress of students in traditional school districts statewide.

Under the leadership of Louisiana School Superintendent John White, the state has embarked on the difficult but essential journey to increase school performance standards by the year 2025. Performance scores released this month reflect both the determination and challenges associated with continuing to raise the bar.

For more than a decade, LAPCS has been a leading voice for higher expectations and for driving progress inside the classroom. “We are proud that Louisiana charter school leaders are some of our state’s loudest advocates for raising the academic bar, and for recognizing performance indicators that reflect more than just student test scores,” said LAPCS Executive Director Caroline Roemer.

According to Louisiana Department of Education data, many schools are experiencing growth, including schools with historically disadvantaged students. The following graph shows how the letter grade distribution shifted for charter schools statewide in 2019: 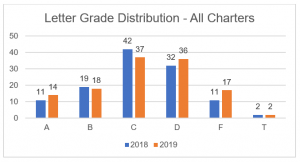 School letter grades serve two fundamental purposes: to show parents how schools are performing and to hold schools accountable for how well they prepare all students. As the state of Louisiana continues to raise the bar, the school performance rating system gives schools the ability to better identify needs and target resources to populations of students who require the most support.

LAPCS believes Louisiana’s grading system acknowledges many of the successful innovations that charter schools are implementing, including the focus on year-to-year student growth and a more robust view of high school education that acknowledges how schools prepare students for careers and the workforce, as well as college. “Public charter schools in Louisiana work hard every day toward the rigorous goals of mastery by 2025,” said Roemer, “and more importantly, they are leading the way in innovative approaches toward achieving mastery level proficiency.”

(Note: Only 130 of 156 Louisiana public charter schools were eligible to receive letter grades.)

School performance data provides a snapshot of the state’s progress in preparing K-12 students, in a manner comparable with other schools nationwide. The Louisiana Association of Public Charter Schools is proud to applaud schools recognized with significant improvement with Top Gains and Equity Designation, with some schools recognized in both categories.

* Indicates schools that appear on both lists (15 schools)

From 2018 to 2019, NOLA Public Schools’ District Performance Score (DPS) increased from 66.2 to 67.8 points, maintaining an overall “C” letter grade. The majority of charter schools improved or maintained their letter grades, with 75% of the city’s charter schools earning a Progress Index rating of “A” or “B.” Additionally, the New Orleans’ Cohort Graduation Rate Index rose from a C to a B.

Most significantly, New Orleans stands out for providing educational opportunity for students living in poverty. More public charter schools in Orleans Parish earned an “A” or “B” than in the three other large urban parishes in Louisiana.

LAPCS recognizes significant accomplishments by single school site operators New Orleans Military and Maritime Academy, Sophie B. Wright Institute of Academic Excellence, Bricolage Academy, and Homer A. Plessy Community School, all of whom worked hard to improve their letter grade in 2019. Most significantly, LAPCS recognizes L.B. Landry-O. Perry Walker High School (within the Algiers Charter Schools Association network) for lifting its letter grade from an F to a C in a single school year.

Cumulative district scores are listed below: 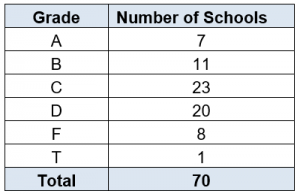 In addition to school- and citywide data, LAPCS wants to specially recognize Steven Gamache, an 8th grade English/Language Arts Teacher and Middle School ELA Curriculum Manager and Coach at Paul Habans Charter School (Crescent City Schools network), for his recent selection as a 2019-2020 Milken Educator Awardee. Milken Educators are selected in early to mid-career for what they have achieved and for the promise of what they will accomplish. Steven was one of just forty educators nationwide to receive this prestigious award in 2019.

“New Orleans continues to shine a light on what success can look like,” says Roemer. “Some of our best performing networks have taken over many of the lowest-performing schools in recent years, and they are moving students ahead. Sadly, in 2005, nearly two-thirds of New Orleans students attended our state’s lowest-performing schools. That number is now down to 8%. At the same time, the percentage of students attending an A- or B-graded school has jumped from 13% to 30%. Contrary to what some may say, New Orleans charter schools are helping our students achieve more than they have in decades.”

LAPCS hopes the release of 2019 school performance data provides an opportunity for thoughtful discussion about student progress and equity amongst parents, educators, and school authorizers. Open conversations and transparency are essential as we work toward achieving 2025 statewide performance standards.

The Louisiana Association of Public Charter Schools (LAPCS) is a 501(c)(3) nonprofit organization whose mission is to support, promote, and advocate for the Louisiana charter school movement, increasing student access to high-quality public schools statewide. Learn more about LAPCS at https://lacharterschools.org.