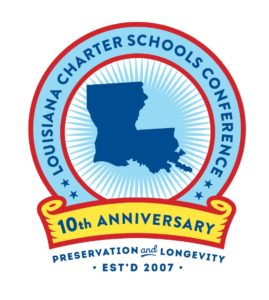 “Providing for a child’s education is one of the most important responsibilities of a parent. Therefore, it is critical and makes total sense that parents should have the right to have educational choices,” said Caroline Roemer, Executive Director of the Louisiana Association of Public Charter Schools. “From one end of the state to the other, charter schools have led the way to create more choices and it is clear Louisiana charter schools have an important role to play in the education of our children.”

Roemer, who has been with LAPCS since 2007, will detail the organization’s major successes over the last decade and look ahead to key priorities for the coming years at the organization’s 10th Annual Louisiana Charter Schools Conference from December 13-14, 2017. The conference will bring together hundreds of charter school educators, leaders, and supporters for a day of learning and networking.

“During the past decade, LAPCS has been at the forefront of shaping charter law and empowering parents to have a say in their child’s education,” said Roemer. “I’m thrilled to have had the privilege to be a part of that growth.”

The conference will feature speakers from across the state and country who are leading the way on charter school work.

This year, John White, Louisiana’s Superintendent of Education, will be a keynote speaker. During his nearly six years in the position, Louisiana’s high school graduation rate, ACT scores, and Advanced Placement scores are all up. The state ranks 10th among 17 states where all students take the ACT, which measures college readiness.

“John White is one of the longest-serving superintendents in the U.S. and is often called to the national stage to talk about Louisiana’s education reforms,” said Roemer. “It has been hugely beneficial to have had Superintendent White’s consistent leadership. He goes to work each day with the absolute belief that all students be given equal opportunity for an education that prepares them for life.”

In addition to White, LAPCS is honored to also have Louisiana’s Poet Laureate Dr. Jack Bedell and Professor Daniel Willingham from the University of Virginia address the conference.

Bedell was appointed to the post in 2017 by Governor John Bel Edwards. He is the author of nine books and has taught creative writing to students for the last 30 years. His work reflects Louisiana life and its people.

Willingham is a nationally recognized expert on how to get your mind to read. The psychology professor is described as putting the “funk” back in functional brain imaging.

The theme for the Louisiana Charter Schools Conference is “Preservation and Longevity” and it will be held at the Hyatt Regency in New Orleans. For more information, visit lacharterschools.org/conference.