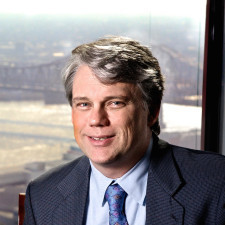 How did you become involved with this charter school?
I was asked by a parent to apply for a position on the board. Lycee was, at the time, undergoing a complete overhaul of its board whereby an entire new slate of board members was recruited and installed in the Spring of 2013. I participated in a structured interview process whereby a new slate of board members were elected.

Why did you say yes when asked to serve?
I have always been interested in education and, in particular, education reform. One of the many things that attracted me to New Orleans in 2010 was that New Orleans was leading the country by developing a new model for education which emphasized choice and accountability. When I was asked to apply to the Lycee board I was very eager to learn more about the school. After doing some research, I knew that Lycee was already doing a great job of educating its students and was on its way to becoming an outstanding school. I felt that my background in serving on other nonprofit boards and in my law practice would be particularly useful to the new board as it tried to cut through some of the issues which were temporarily holding it back.

What was compelling about the opportunity?
Lycee is a great example of how citizens of New Orleans can work together to create a great school. I am continually amazed at the dedication of the parents who founded the school and those who have joined the effort since that time. At the same time, the board had a lot of work to do when it was reconstructed in Spring 2013. The school was only a few years old and had an aggressive plan for growth which was somewhat hindered by some financial and leadership issues. All of those original board members believed we had two to three years of work to do in that first year. What we learned is that because we are growing so fast and spored to be the first public K-12 Lycee Francais in the United States, that the pace will continue. As a board, we have worked with school leadership to institute more transparency in our decision-making process; recruit and retain a diverse group of students and families; obtained accreditation from the French Ministry of Education; and begin planning for a middle school and high school.

What leadership roles have you held while serving on the board?
Within a few weeks of joining the board, in May 2013, we learned that the candidate to whom the board has extended the CEO position had declined the job and there was no back-up plan. I served on a committee, chaired by Erin Greenwald, that formulated a plan to interview for and hire an interim CEO on a 20 day timeline. We met that deadline and hired Keith Bartlett as our interim CEO for a one year term. In June 2013 I was elected to serve as Board Chair for 2013-2014. When my term as Board Chair ended, I briefly served as chair of the committee to find a permanent CEO. We quickly determined that we had already ‘found’ our CEO and the board accepted the recommendation to ask Keith Bartlett to serve as permanent CEO.

Is there anything you know now that you wished you had known before?
Before joining the Lycee board, and during my early time on the board I took advantage of advice from others I knew who had served on charter school boards in the past. My advice to anyone joining a board would be to talk with a diverse group of people to get their perspectives on the proper role and function of a charter school board. I was lucky enough to have received some great advice in that regard. Thankfully, the Lycee board recognized immediately that its most important job was to retain a great school leader. I am very confident that we made the right decision to hire Keith Bartlett as our CEO.