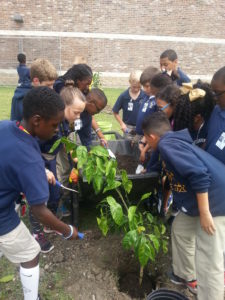 USDA’s Food and Nutrition Service recently awarded Belle Chasse Academy (BCA) a “One in a Melon” award for administering an exemplary farm to school program. One school district per state was selected for the award by receiving the most public nominations.

“It is such an honor for our school to be chosen for this award,” said Sam Downing, the School Garden Coordinator for BCA. “Our students have worked very hard to make the garden a success, and our entire staff have been very supportive. Our Head of School, Jane Dye, cast the vision for our school garden and our Food Service Director Leslie Babin worked very hard to source local food and expose our students to healthy vegetables in new and creative ways.”

From March 15 to April 15, parents, teachers, community stakeholders, and students were invited to visit USDA’s Farm to School Census website and nominate their favorite farm to school program to receive the award.

BCA is committed to sustainable, organic agricultural practices and teaching students not only about food and good nutrition but also how they, too can grow their own food. “I tell our students growing your own food is like printing your own money,” said Downing. BCA began its Victory Garden program last year, its inspiration taken from the “Victory Gardens” planted by families during World War II in an effort to assist with the war effort. During the 2015-16 school year, the school added a large production garden and built 8 grade level raised planter beds to be used by teachers as an extension of their classroom learning environment. In 2016-17 the school plans to build an interactive Math Garden as well as add a hydroponic growing system to its greenhouse.

Farm to school programs help kids form healthy habits, learn where their food comes from, and develop an understanding of the importance of nutrition and agriculture. Results of the 2015 USDA Farm to School Census show that schools with robust farm to school programs report reductions in food waste, higher school meal participation rates, and increased willingness of the students to try new foods, notably fruits and vegetables. Census results also show that U.S. schools invested nearly $800 million in local food from farmers, ranchers, fishermen, and food processors and manufacturers in the 2013- 2014 school year, which is money going directly back into local communities.

Tagged with: Belle Chasse Academy, Farm to School Census, One in a Melon Award, USDA